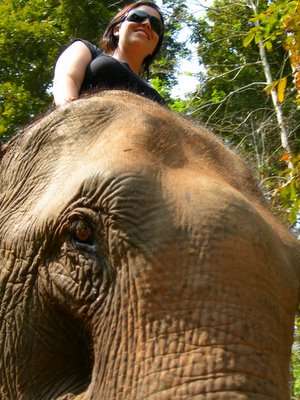 Move over Jane, meet Tarzan's new queen of the jungle, Thailands first female mahout and elephant tamer extraordinaire. Yes here she is captured in action... Please note there was no photoshop involved in bringing you this vision of our swashbuckling hero riding high across the raging torrent beneath her.

Now some of you out there might be saying that's not very PC of Kate Browne the elephant woman riding atop that poor sensitive creature with the largest brain on the planet. But no.... In actual fact Elephant woman Browne has the high moral ground as some will notice she is riding on the head and not the spine, which is very weak. You may also notice she doesn't have in her hand a huge metal spikey stick in which to shove into the elephant's eye. Even more unusually the elephant she is riding is rather plump, reasonably happy and in much better shape than most of the 3000 elephants remaining here in Thailand. 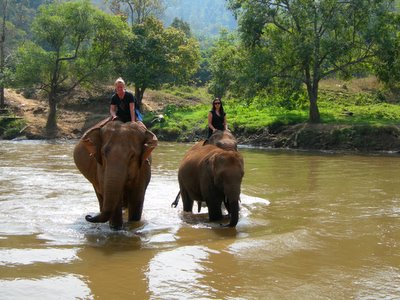 We are currently in the middle of 2 weeks volunteer work at the Elephant Nature park just north of Chiang mai. www.elephantnaturepark.org
Those Elephants which have been mistreated, or injured, sick, dying or all of the above, may be lucky enough to come to this park where they can roam around free, with as many bananas, pumpkin, tourist love and mud baths as they can possibly want. It's florida for Elephants. 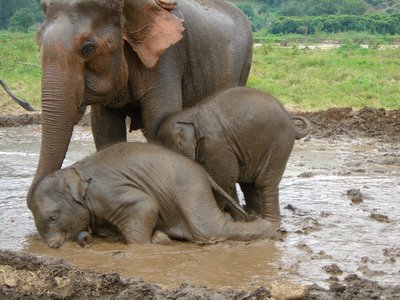 Yes, Elephas maximus has a rough ride over here and is a species well on the endangered list. Only 30,000 Asian Elephant's remain. Most of them are slaves to us humans as very little are free to roam in the jungle. 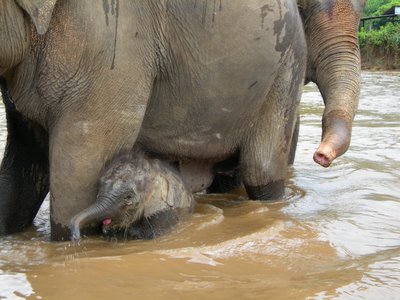 Here in Thailand, with logging banned in the late eighties, many elephants were out of a job so working for tourists became the only chance of survival. Unfortunately animal welfare, isnt as popular as Jackie chan movies and the way these beautiful intelligent creatures are treated is awful. Every elephant that gives a ride to a tourist has been beaten into submission, probably dragged away screaming from it's mother 4 years too early, and made to work long hard hours on very little food for a bunch of backpackers to get their happy snaps. 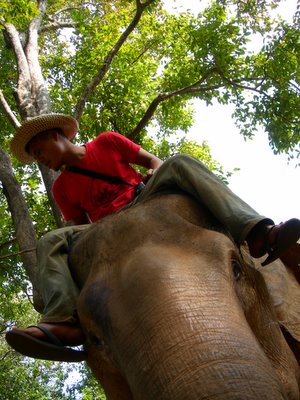 Tourists are given rides on the elephant's back which is far too weak as opposed to the neck, head area. Most Foreigners remain completely unaware whilst they are here as to the suffering of these animals.... until now. 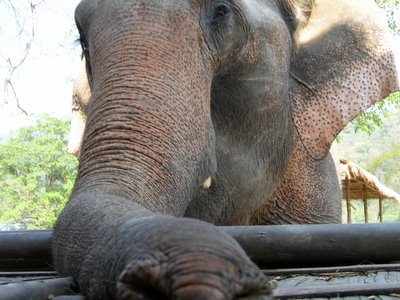 Because instead of looking like a goose riding high on an elephants back, you can visit a place where elephants roam free, recieve medical help and more cucumbers than you can shake a trunk at. 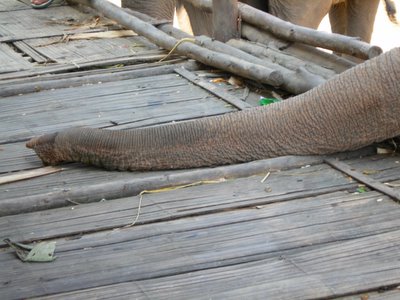 Along with some Brits, Canadians, a few too many Americans, Kate and I are spending 2 weeks building muck holes, shoving up to 60 kilos of pineapples into that trunk, and generally being holier than thou animal friendly crusaders fighting for the good of the common asian elephant.
But what about that Elephant trunk? We have learnt much indeed. In fact it has more than 40,000 muscles and let me tell you.... these creatures are very powerful. People( including that all important tourist) get killed every year from Elephants. Not surprising really considering the way we treat them. Yes not only are we saving the elephant... we're risking our lives doing it. One slip and 4 tons of half digested vegetable matter could land on us at any moment. 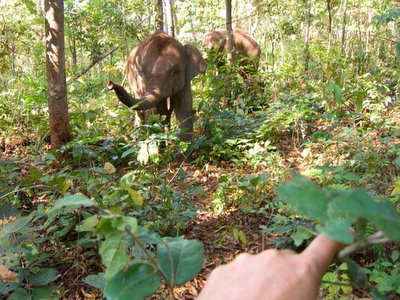 Truth be known, it's very easy here. In fact for the volunteers it's more like an eco tourist tour. The work we do barely contributes because lets be honest here, aside from a few facts about it's trunk, I know bugger all about Elephants. ( other than the fact they're very large). Our biggest contribution though is money, 6o kilos is a lot of pineapple to purchase, but also we are here to spread the word and that's what I'm doing now. So rich foreigners who like to read blogs, come to Northern Thailand and visit this elephant nature park. If you can't make it this year, make sure you're all superior at the next dinner party when someone brags about riding an elephant. 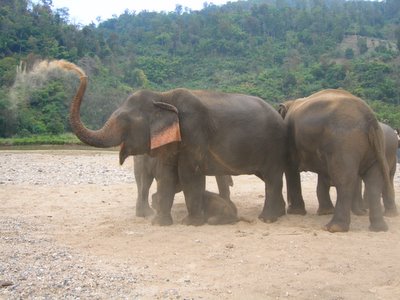 In case you're wondering why the silly bugger is blowing dust everywhere, it's actually sunscreen elephant style. They have very soft skin you know. 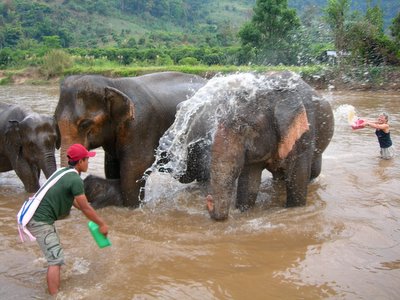 They do like it awfully much when you throw water all over them. The key is not to be too close when they roll over in the water. HOORAY FOR ELEPHANTS 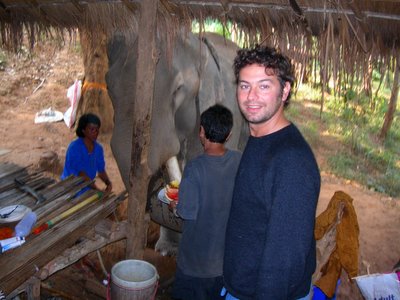 Stories like this doesnt really help people to understand what a complicated work is is to be a mahout, and how much work, during many years, it takes to get the experience needed. In a world where you can go to India and learn Ajurveda in a couple of weeks, theres also people who actually think you can learn the profession of mahout in the same way.

You cant. And theres no meaning at all giving people the hope that they can. And when understanding this, its time to honor the people who actually can, and confirm their expertise. Myself, Im a php programmer and MySQL database designer. I program dynamic websites. But since 1977 I have also worked and trained almost 70 elephants, including ten wild caought elephants in Zimbabwe, India.

Now when I introduce myself as a database manager, people give me a certain respect, and understand that in combination with PHP programming, is in some ways a guarrantee that Im not totally stupid.

But when I introduce myself as the elephant trainer, this is just a funny, interesting thing, but noone understands that it needs an intellectual capacity.

I can truly say, that of my two professions, caring for, and training elephants, is the most difficault and demanding one, which few people in fact can perform, while you can actually bring most people who can read or write, to become a programmer. They want master the profession, and they will never really become a star, but they can do it for several years, earning some money.

While caring for elephants is lethal activy for those who doesnt really know what they are doing.

Please do not make people believe that young western girls can ever learn this after a couple of weeks in a camp. It will give wrong signals. Its a job for a very few talented, and most of them were actually born into it.

And when a true mahout ride an elephant, they dont support their body weight on their hands...